When my husband, Josh, grows up, he dreams of being a comedian. He even has a title for his first stand up show - "Asking for a Friend".  However, he's promised me he would wait until I retire or switch occupations until he goes on tour because so many of his jokes relate to me and/or me being a teacher. He doesn't want to say something that would land me on the front page of the local newspaper. While I appreciate him waiting to go on tour 😉, our home has become a pressure cooker of comedy.  The longer he waits to share all of his humor with the public, the funnier he becomes within our home.

Here's just a sneak peak into the daily comedy show that happens in our home.

Josh was able to get his first Fauci Ouchy this past Thursday, thankfully. On Friday, my, at times, very serious dad text him to see how he was feeling after his first shot.  Josh told him he was feeling fine, but wasn't sure if he should be concerned with this reaction with his arm. 😂 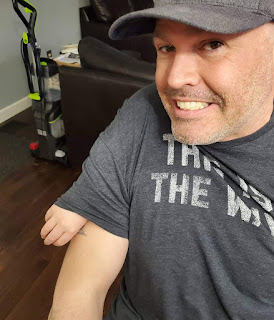